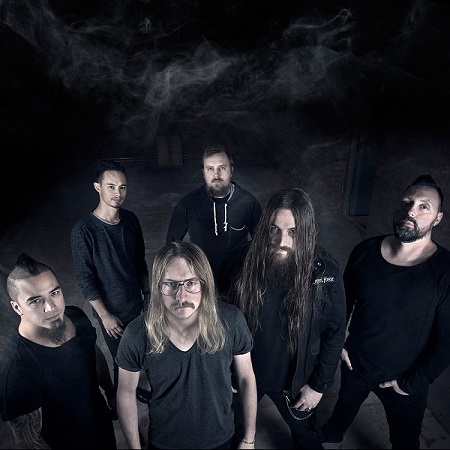 Every now and then, you stumble upon a band that changes your perspective of things.One of these rare bands is Gothenburg, Sweden’s DESPITE. Like a hungry mantis ambushing its prey, the band’s unique style of modern metal music will grab your attention and never let go. Featuring three eight-string guitar players, this band is so heavy and down-tuned they make the Richter scale overload with their music. These guys are making metal interesting again, so listen up!

DESPITE was originally formed in 1998 by guitarist Timmy Leng as a side project. The band released a seven song EP entitled “In Your Despite” in 2009. They quickly followed up with their debut album “Clenched” which they released independently in 2010. In 2012 the band refocused, and the lineup changed to better suit a more aggressive, technical direction. After two years, the band emerged from their cocoon in early 2014 with the release of “Epic” – a beautifully brutal EP. Epic was exceptionally well received and garnered critical acclaim from the press and their growing international fan base. Later on the same year, DESPITE released “Chaos Trigger” a single that catapulted the band to new levels of notoriety, and as a result VH1.com named the band one of “fifteen metal bands you should be listening to”. On a high note, the band followed up in early 2015 with their latest single “Praedonum”, and donated a portion of the sales to The National Center for Missing and Exploited Children. Shortly thereafter Despite caught the attention of Eclipse Records (Mushroomhead, Bobaflex, A Breach of Silence), and re-entered the studio to record new material for the label’s consideration. Naturally, upon hearing the new material Eclipse signed the band in early 2016.

The new album, entitled “Synergi” was produced by Oscar Nilsson at Crehate Studios (Gothenburg, Sweden). Synergi features thirteen amazing songs where harsh sonic collisions convey a mature progressive means to an abrasive end. There’s no doubt the band has evolved since their last offering, and this evolution is only the beginning of the polyrhythmic soundscapes that DESPITE purvey so extremely well.

Synergi was released worldwide on July 22, 2016