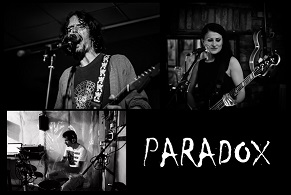 Paradox are an Alternative Rock/Grunge Outfit from Cork, Ireland. Formed in 1996 by brothers Pete Mac and Mike Mac the early Paradox sound was heavily influenced by the Grunge Era of the 90’s. The band shaped much of their music around many vocal harmonies layered on top of power chord riffs. After playing the local circuit, recording many demos and fine tuning their sound Paradox headed to the US and secured a record deal with an independent label based in Los Angeles, California. Pete and Mike flew out to LA for 2 weeks and recorded their debut album ‘Circle of Growth’ in December 2000. They both played all instruments on the album as well as producing the album themselves. Paradox continued to tour all over Ireland and the US with many different bass players jumping in for the bands live shows. The band remain a 3 piece to this day.

When they returned from the US the second time they parted ways with their label and decided that the only way to go is DIY. Paradox returned to the studio in January 2003 and recorded 6 new songs that were initially to be released as an EP. Among these tracks was the song ‘Lame and Languid’ which portrayed a completely new sound for Paradox. In January 2004 Paradox returned yet again to the same studio and recorded another 6 songs including tracks ‘Downward Spiral’ and ‘Pretend Friend’. These 12 songs became ‘Sacred’ the album. ‘Sacred’ was a major progression from the bands debut album ‘Circle of Growth’, veering away from their previous Punk Rock/Grunge sound to a more Melodic Alternative Sound that the band has been thriving to achieve since their creation. Pete and Mike Mac yet again played all instruments on the album. ‘Sacred’ proved to be a DIY success receiving rave reviews online from fans to online fanzines and radio stations. In 2009 Pete Mac recorded and released his first solo album titled ‘In Limbo’ followed  by a solo tour of Germany. Pete played all instruments as well as producing the album himself. Instead of going to a traditional recording studio Pete also recorded most of the songs using a 4-track. By 2010 Pete and Mike were back rehearsing for a new Paradox album. Entitled ‘Corporate Pollution’ the album was recorded July 2010 at a secluded studio in Co. Kerry, Ireland. Just like the last two albums Pete and Mike perform all instruments. ‘Corporate Pollution’ marks a further evolution in the Paradox sound. From the opening track ‘Corporate Pollution’ with it’s churning guitar riffs and political sneers the track seems to somewhat set the tone for the rest of the album. One reviewer noted that the album had ‘so many influences it’s hard to list them all. the music is solid, timeless and to the point’. Another review from Loud-Stuff.com added – ‘Maybe the ultimate compliment you can pay to this album is that you could listen to it between Nirvana’s In Utero and Alice in Chains Dirt and it’s every bit as good’.  ‘Mr. Bureaucracy’ was chosen to be the first single with it’s fast pulsing riffs and melodic vocal refrains. The band also shot a music video for ‘Mr. Bureaucracy’ in 2012 which was nominated for best song at the Berlin Music Video Awards, Dublin International short film and music awards the Portobello Film Festival London in 2013. In 2012 the ‘Corporate Pollution’ track ‘Repress Excess’ was used on the soundtrack for Canadian horror movie ‘Truth’ which screened at the Cannes Film Festival and won the Canada International Film Festival’s Royal Reel Award. Paradox have toured both Europe and the US as well as playing support to the likes of Therapy?, Kerbdog and Shonen Knife in 2013. 2014 saw Paradox back in the studio recording their 4th album to date at Wavefield Recording Studios in Bantry, West Cork with multi tasking musician and engineer Brian Casey on the desk. Titled ‘Chapters’ the 14 track album combines a variety of new sounds some of  which have not yet been heard on any previous Paradox album. The first single ‘Nothing Lasts’ features slow melancholic Cello tones carrying the song to it’s climatic refrains of ‘Nothing Lasts’. A music video also accompanies the single. Cello makes an appearance on various other tracks on the album such as the track ‘Eat’ which subject focuses on the treatment of animals in factory farms and was initially inspired by the controversial documentary Earthlings. The new album has been a working progress for over a year which originated in September 2013 with songwriter Pete Mac playing all instruments on the recordings. Paradox drummer Mike Mac joined his brother Pete in the studio for a session in May 2014 after dropping back from his Canadian travels to drum on 4 tracks on the album. Overall ‘Chapters’ is far more experimental than any previous album with the band pushing their limits as much as possible in the studio which included recording in different rooms, distorting various bass sounds and having what became a trademark routine for many songs of a noise track when recording the electric guitar. The Noise Track basically consisted of Pete improvising spontaneously with a heavily distorted guitar while recording over various tracks with nothing rehearsed as the noise track was being recorded to add an extra live feel to certain tracks. As the album name suggests this is the next chapter in the band’s history with many songs reflecting chapters in the band member’s lives.