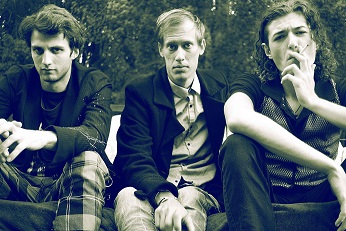 SKINWALKERS are a band of people, for the people; a no-restriction mentality smashing out political, emotionally-charged rock n roll with a message about the world.

Their music holds no allegiance to any specific genre or style, blurring the lines on how to define the band as anything other than SKINWALKERS.

“Famed for singing about issues that are important to their audience, their music harks back to a time when punk rock had a message”- Time Off Mag – 15th July, 2011

Forming the group in 2008, Lach Jenno (Guitar/Vocals), Matt Turner (Drums/Vocals) and Lenny Delandre (Bass / Vocals) have released 2 EP’s and 4 singles since their inception, all produced by Kalju Tonuma. Rounding out 2013 they release their new single Fateless, with an EP to follow. Since their first national tour in 2011, the band has supported the Misfits (USA), GrimSkunk (USA), The BellRays (USA), Frenzal Rhomb, The Datsuns and recently performing at Big Day Out on the Gold Coast.

Following the release of the 2012 single, ‘Everyone Has A Story’, the band started a project that interacts with people from all walks of life around the world to share their story, beliefs and thoughts to those watching, which they aptly named after the song as the ‘Everyone Has A Story’ video series. Such names including Ben Lee, Lucius Borich, Kris Schroeder, Foster Gamble and more have appeared, with the project ongoing to date. The band is continuing to grow support with Australian community radio stations along with International online stations in the USA and Europe.

“With a well crafted bed of rock music and an urgency in the vocals, Skinwalkers deliver a message in a way that draws you in and rocks you out. One of the most exciting bands I’ve come across in years”. ‘If you don’t know Skinwalkers music now is the time to become familiar with this Queensland 3 piece.’ – Voice FM, Ballarat January 2013

Their social convictions were founded in the writing of their first EP, ‘We Are The Streets’. The lead track was inspired by the youth homelessness crisis in Australia. Captain Paul Moulds, the Director of the Oasis Youth Support Network in Sydney would acclaim the 2010 release of the ‘We Are The Streets’ EP as “a great example of how people are contributing in their own way to raise awareness and bring about change.

“Green Day/Nirvana – each generation seems to throw up an act that strips away the bullshit; that arrives from out of nowhere with only bass, guitar, drums and a powerful voice out front and a revolutionary belief in making rock n roll matter again. Skinwalkers are that band. “– Mark Mordue, February 2011

– Single Everyone Has A Story released through MGM 7th September 2012.

– EP We Are the Streets released independently, 4th June 2010.