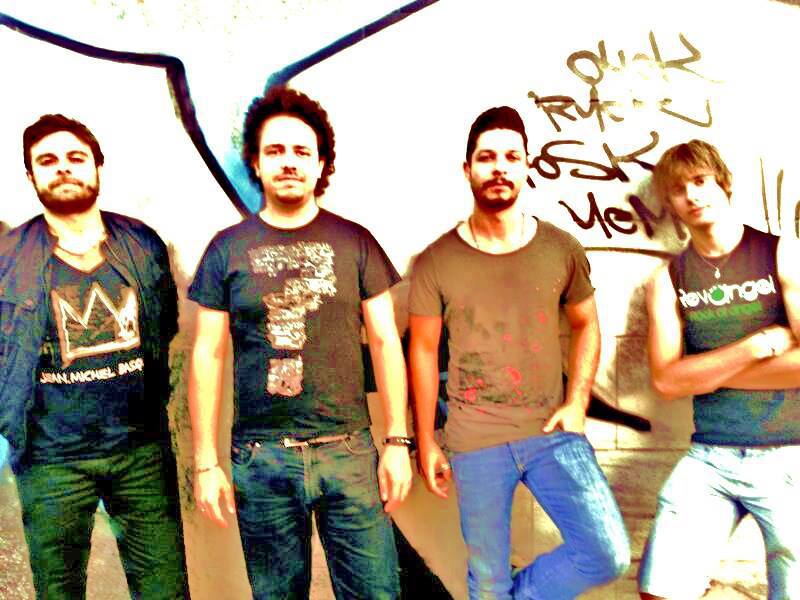 The spark that gave Revangel life happened in 2010, through an encounter between guitarist and multi-musician Evan (Ivan Montafia – The arms and mind) and lyricist and vocalist Enni (Angelo Liaci –The songwriter, The soul).

The pair met musically through the U2 tribute band Rejoice, in which they hold the roles of Bono and The Edge, but soon decided it was time to shine under their own light and form a new star: Revangel.

This encounter inspired their partnership, in the name of friendship and love of music. It closes a circle between two generations, two stories that come together where the streets have no name.

During their first few months of life they composed many songs and released their first self-produced album in July 2012. A small galaxy with only 4 planets, “Lapsus” is a sign of their desire to tell their stories through music, instinctively, as if by destiny.

The 4 songs on their “Lapsus” EP were chosen from among 20 composed pieces, it is gaining great reviews from critics, and a growing public interest, and is available to download from the bands website or in CD format.

Revangel’s compositional process is purely emotional and ideally begins as a “big bang” which then leads to the creation of the planets, stars, comets and asteroids that dot their universe – Their music.

It all comes together thanks to Evan, who manages to keep the creative flow organised and finalise the production. While Enni is instead the generator, not easily contained, unpredictable, disarming at times, he is the chemical component in their spontaneous creativity.

Revangel’s lyrics are in English, the language of rock, suitable, according to them, to reach as many people in the world as possible, but especially to convey universal ideas and emotions. Emotions, that Evan is always looking for in their sound, emotions, in the lyrics of Enni – which start from insights of his own life, and are then reflected in the mirror of life in which everyone can see themselves. It’s free writing and eclectic, with open minds, but with one rule: to be genuine.

The duo even self-produced their first music video, for the ‘single’ from the EP, “Part of it”. They filmed and assembled it all into a real music video by combining various scenes from their headquarters at Spazio Aurora and other footage filmed almost by chance during a trip to Dublin in 2012.

At the beginning of 2013 they took part in ‘Live Music Lombardia’, a live tour contest of eight dates in 8 venues, with 56 bands. Revangel decided to play live as a duo, although conscious of being at a disadvantage compared to other bands complete with bass and drums, they had a great desire to hear their songs live. They achieved first place from technical juries on two evenings, and finished around mid-table by the end of the tour.

But, the search for the rhythm section continued.

Then, after some testing with various drummers and bass players, in May 2013, the turning point came. Evan found an ad from a drummer looking for a band, he heard “Lapsus”, and was impressed. The guitarist also discovered that the most suitable bass player could even be his own brother, Dallas.

They tried straight away. In Jankie their drummer was found, and together with Dallas, they had the rhythm section they had been hoping for, Revangel are complete!

Finally, they have a full line up, which officially kicks off with their first live gig on 30th May 2013, during a showcase at Spazio Aurora Rozzano! It’s like home for Revangel, the place where they recorded the first album, where they gave life to all the group’s songs and shot most of the music video for “Part of it.”

The feeling of finally being four on stage is fantastic, and the energy brought by the two new members of the group can be heard and felt in the performance!

On June 21, 2013 the band participated in the “Carpignago Rock Contest” in a village on the outskirts of Pavia, presented by the great Albert One. Revangel won ahead of four other groups! The victory and the energy shown in the exhibition brought an invitation, three weeks later, to the beer festival in “San Genesio”!

The concert in San Genesio, together with that at the Woodstock Live Pub Grandate (Co) a week earlier, were the longest shows for them so far, and marked the introduction of new unreleased tracks, never played before, into their set.

At the moment, between live shows and their other commitments, Revangel are also involved in studio sessions, working on the composition and arrangement of their new album, which will see light by the end of the year.

Join us on our journey.. It’s just beginning!

Be Part Of It!