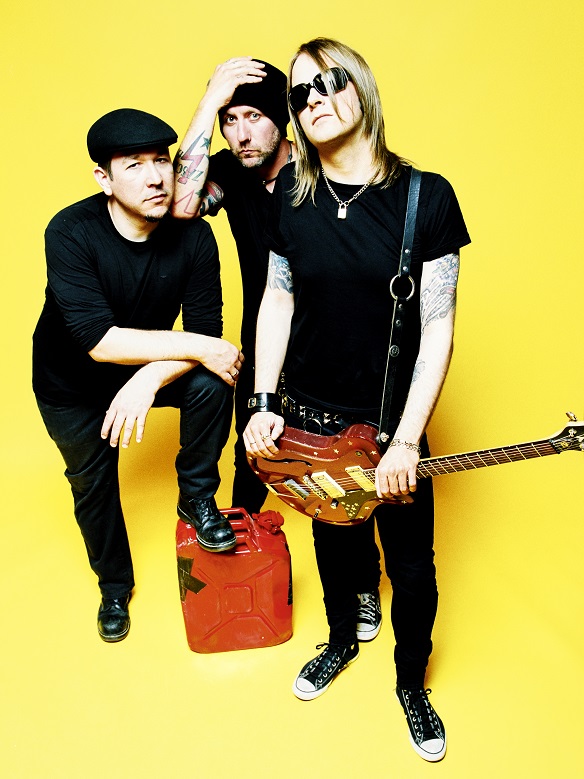 Imagine a 70s stadium rock n’ roll tape coming through a trashy 90s pop-punk stereo, digitally remastered today for speeding down the autobahn !
Combining a riff oriented sound, melodic supercatchy choruses and some tasty lead guitar work with the contrast to fast and furious punk rock n’ roll while transforming this into their own modern rock sound. The german trio Torpedohead lives the imagination of the New York Dolls and The Clash jamming on Cheap Trick and Kinks tunes, while Nirvana is stiring up the basement.
Since Torpedohead hit the stage the first time in 2008, the band featuring singer and guitarist Sven Spacebrain , drummer Zasch and bassist Hardy has been giging relentless in Germany and other European countries, supporting international rock acts such as the legendary New York Dolls, Peter Pan Speedrock, Dan Baird, Prima Donna among others. 2009 saw Torpedohead hit the streets with their debut Album “Lovesick avenue”. Filled with roaring rock n’ roll riffs the Album received raving reviews in the international press and several webzines. In 2010 Torpedohead set up their home at the famous Woodhouse Studios in Germany to record the 5 Track EP: “Let’s go for a ride” with producer Siggi Bemm (Kreator, Lacuna Coil). The release along with the Video/Single of “Cadillac Beach” again kickstarted an avalange of great reviews and left fans screaming for more. Wasting no time the trio returned to the Woodhouse studio shortly afterwards to record their new album:
Their new album “Greetings from Heartbreak Key”, was released on October 26th through Woodhouse Records, containing 12 original tracks featuring the fast forward rock n’ roll single “Gasoline”, along with 2 tracks of the previously unavailableout last EP !
Press Reviews:
“Sleaze Rock returns with Torpedohead” ( NIKKI SIXX’S “RANDOM $#!%” / www.sixxsense / USA)
“A rockin’ gig in your car or a front row seat to a show you have to see again and again!” (Screamer Magazine / USA)
“These songs simply rip into your veins !” (Krashcity Magazine / USA)
“The bands modern take on pop-punk-rock n’ roll is infectious” (Hardrock Haven / USA)

“It’s like a party tape for people who plan on burning the house down as soon as the party is over!” (Classic Rock Magazine / UK)
“These five tracks feel like the first side of a classic vinyl album” (Powerplay Magazine / UK)
“Torpedohead: un nome da segnare sul taccuino!” (www.roxxzone.com / Italy )
Links: