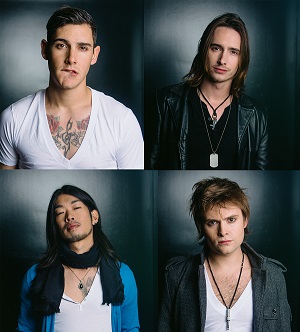 Ruby Eyes is a rock band that calls Los Angeles home. After the 2011 dissolution of LA band “The Deadlies”, bassist Yutaka Sao began the search for a band of his own. Along with former guitar player Nikolaj and ex-drummer Chris Dunn, the trio met vocalist Tim Johnson and began to create. Ruby Eyes’ first EP was laid down, and the band hit the stage in 2012.
Due to various events, Nikolaj and Chris parted ways with Tim and Yutaka, who quickly went on the hunt for players. Drummer Matt Coatsworth jumped behind the kit in the summer of 2012 after moving to LA from New Orleans. While Ruby Eyes had made good progress, the music began to head in a different direction. Something special was starting to happen as new, edgier material began to emerge. In the fall of 2012, the frustrating search for a guitar player ended. Mike O’Grady completed the lineup, and a new Ruby Eyes was born to the world.
Through trial, error, a drum kit getting stolen, recording sessions in Malibu at Filter’s studio, countless auditions, a scare with China and a photoshoot in Venice, the band has solidified its lineup and earned its place as one of LA’s emerging acts. While the quartet’s members come from all over the world (Japan, Canada, Ohio and California) and from ranging musical backgrounds, there is a common goal: To play music their way and enjoy the ride.