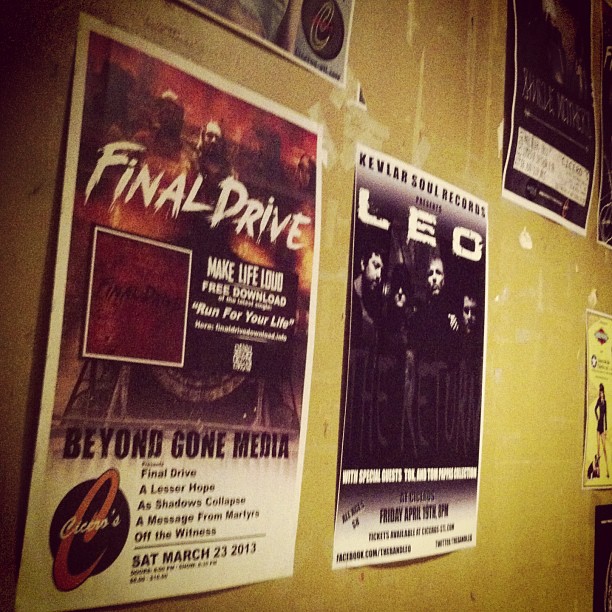 In March of 2003 Final Drive recorded their first group of songs at The Maple Room Studios. This release has been re-released as a digital release entitled “In the Beginning there were Three” available on our http://music.finaldrive.org/.

At the end of 2003 and early 2004 Final Drive recorded their album “Good Things Come to Those Who Refuse to Wait” at Tiny Apertures in St.Louis Missouri. This album is available for purchase oniTunes or Listen for Free on Spotify or Soundcloud.

After completion of the recordings on “Good Things” Casey Logue left the band and was replaced by Chelsea Muckerman. In 2004, Final Drive was chosen to be 1 of 8 bands to battle for a spot on Ozzfest 2005 on the MTV produced television show “The Battle for Ozzfest”. Newly added bassist Chelsea Muckerman was chosen by the show to represent the band and was filmed during Ozzfest 2004.
In October 2004 Final Drive released “Good Things Come to Those who refuse to Wait” with Casey Logue and Chelsea Muckerman both performing during the Mississippi Nights CD Release show in St.Louis Missouri. Final Drive went on to tour extensively through 2004/2005 in support of “Good Things”.

With a slow in the recording process Final Drive went in on a split with theRend, also from St.Louis Missouri and released 3 new songs from the upcoming album on the split. Final Drive and theRend toured the west coast in support. Final Drive to theRend Split is available at http://music.finaldrive.org/ .

In January 2011, Final Drive released the “IRON TIDES EP”, which includes recordings created during the 2009-2011 line up changes and features perfomances by Mike Brooks (drums), Ron Hampton (drums), Brock Parsons (bass) and Ron Tucker (bass). This release is available for purchase on iTunes . Listen for free on Soundcloud.

2012 marks the 10 year anniversary of the band. With a fresh new line up and a new record in the works, keep your ear to the ground for some heavy lifting by your new favorite band FINAL DRIVE.