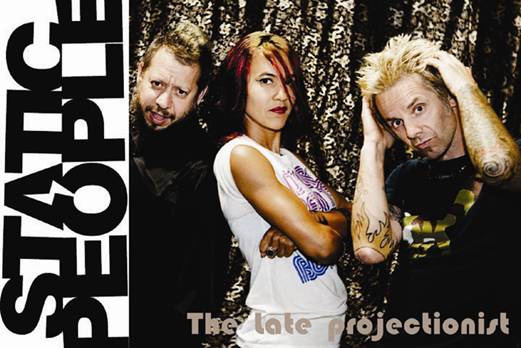 STATIC PEOPLE was formed in 2008 by musicians from San Francisco and Sonoma, CA. The sound is germinated in post punk/alt turbulence, a mix of dirty pop and indie swells, with a lush and urgent voice flying above the riot. Produced by multi-platinum producer Jason Carmer. The band has released a five song EP, the full length album “The Late Projectionist”, a debut video for the title track, with a second video released in June 2012. Static People is Dmitra Smith(voice, keyboards), Pascal Faivre(guitar), Shawn Miller(bass) and Ken Shelf(drums). The band has a new release planned for this spring. 2013 Best Punk/Post Punk Artist – Artists in Music Awards, Los Angeles

“For a performer who defies facile definition, Smith does boast a single defining feature – her voice, which she wields with virtuosic command…with a natural warmth that adds a sultry dimension to the band’s challenging, punk-infused arrangements.” –Bullpit Magazine, LA

“The Late Projectionist brings us deeper into the mind of singer Dmitra Smith…painting vivid pictures of the goings-on of a haunted mind. With top-notch recording and an album full of hooky songs, all they need now is the right company backing them to finally shoot to the top!” –Vandala Concepts, Canada

“Static People are destined to be your next favourite band. They combine distorted greatness, old school punk vibes and a touch of noisy indie – you need them in your life. –Somojo Magazine,UK

“Each track has Dmitra Smith’s voice front and center, full of the same agnst and derision that propelled Patti Smith to stardom.” — The Ripple Effect