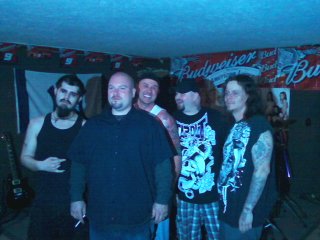 Tears of the Dying was formed in the early summer of 2007. The lineup includes Joe Dogg on vocals,Jay Scary on guitar and vocals,Lucian-guitars,Roqard Johnson on bass,and Josh Billings on Drums. We are currently getting airplay on several radio stations as well as satellite radio and internet radio. We were featured on Vitruvian Records Southwest Florida Metal Scene Compilation disc and by being the only band not from Florida on the cd was a real honor.We have also become friends with legendary multi- platinum rock producer Beau Hill who is famous for his work with Warrant,Ratt,Europe,Alice Cooper,Winger,and Twisted Sister and will be working with him on a project in the near future.Our self titled album was recorded,mixed,and mastered at Red Room Studios by Chris Grogan of Bobaflex.We performed in the Slave to the Metal Tour hosted by fuses own Mistress Juliya in 2009 and shared the Stage with Victory Records own Nobody lives Forever. Our influences range from Helmet, GodSmack,Clutch,Sabbath,Prong,and all of the old school rock/metal roots as well as punk. We have also opened for several national bands as well. Soil,Bobaflex,The Autumn Offering,Dope,Stricken,Flaw,Divine Heresy (including Dino of Fear Factory)and Rollins Band just to name a few. Hailing from Steubenville Oh.We hope you enjoy our music.Look for the upcoming release of our self-titled album on Blastzone Entertainment/Records.