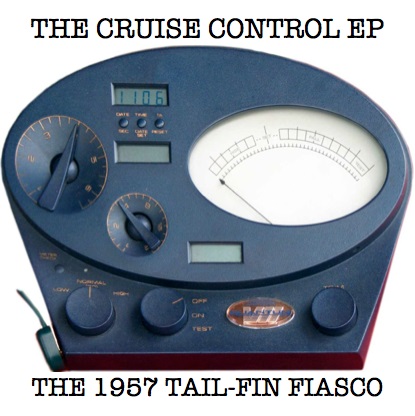 America was gearing up for the sixties. Little Richard screeched his way to the top with ‘Lucille’ and Elvis had 9 hits in a row. Jack Kerouac penned his immortal novel ‘On The Road’, inspiring Americans to seek the promised land, and Harley Earl designed the most beautiful automobile the world would ever see…the year was 1957.

By 1960 the tail-fin was all but extinct. In 2013 Harley Earl appeared to two Essex chancers in a dream. The vision of Harley was as clear as his message: ‘Create melody and meaning that will allow the human race to move freely and without drag… Be aerodynasmic. Be The 1957 Tail-Fin Fiasco’.

“The 1957 Tail-Fin Fiasco throws out complex, sophisticated story-song style rock with a funky nu-jazz edge, sounding like ‘Pretzel Logic’ era ‘Dan. The lyrics bear the mordant wit that was the hallmark of a certain kind of songwriting in the mid to late 70’s. A quality album” (The Modern Folk Music Of America) “This is amazing” (Chris Difford – Squeeze) “Drinking deeply from the well of Becker/Fagen – as we all should” (Pat Kane – The Guardian)

To Hear More go to: http://the1957tail-finfiasco.com