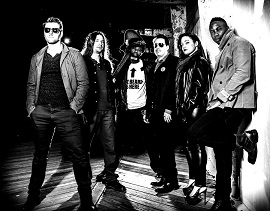 Midnight Mosaic is an eclectic collective of entertainers, whose original brand of Rock ‘n Soul drives their audiences to dance and groove. By combining the familiar tones of soul, funk, dance, and pop they have put their own spin on the Indie rock sound. Influenced, by bands such as Chromeo, The Red Hot Chili Peppers, and The Talking Heads this band is truly a montage of its members’ individual sonic signatures.

Midnight Mosaic has just released their first full-length album, “Fire Work.” In support of their new album Midnight Mosaic is headlining The Bitter End in New York City on January 18. Additionally, they are planning shows in the early part of 2014 in Philadelphia, Baltimore, Boston, and all over New Jersey. Moreover, they are launching a national and international radio campaign. Shortly, after the album comes out Midnight Mosaic will release their first official music video for the first single off the new album “Right to Die.”

Midnight Mosaic features A.t. Hunte (vocals), Gil T. Brown (Bass), Trent Cater (Guitars), AJ (Drums), Harrisyn Hartt (Keyboards/Synth), and DeeM (Backing Vocals). The band formed in 2011 and has toured throughout the Northeast and Mid-Atlantic regions. Midnight Mosaic has received media and industry acclaim for their energetic, over-the-top live performances. In one of her blog posts entitled “At the Midnight Mosaic Show” fashion designer Lacy Hint stated, “The show has begun and Midnight Mosaic started to perform. The energy of the event transferred to the members of the band. The drums were distinctly leading, complemented by heavy beat of the bass and high pitches of very well played keyboards. Once the guitar solo set the mood, the vocalist let go of any decency and rocked the party.”

Midnight Mosaic has been featured on a variety of terrestrial and web-based radio programs in the United States, Europe, Asia, The Middle East, and Australia. Additionally, they have been featured in various music publications including blogs, podcasts, websites, and in print. In one such publication Lauren Pulgarin from Eat Sleep Breathe Music wrote, “Midnight Mosaic brings something new to the music industry with a new cool, yet at the same time almost retro sound. It is this mix of the old and the new that will gain this band many fans in those that search for good drumming, guitar and lyrics in an industry that is currently flooded with bass drops and auto tune.” — Lauren Pulgarin, Eat Sleep Breathe Music